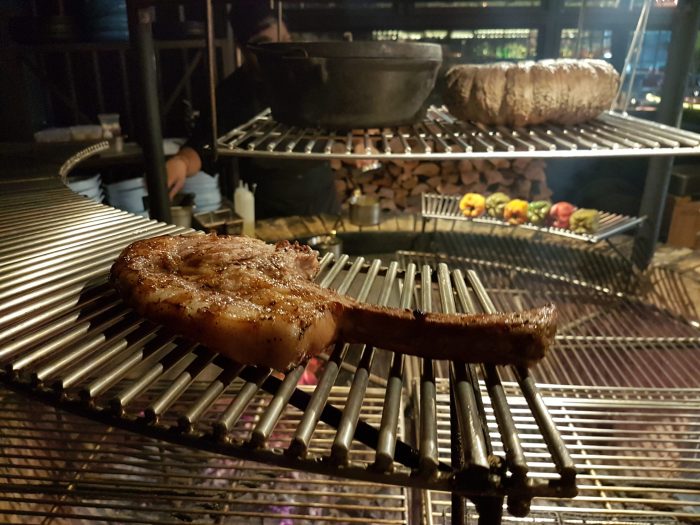 If you run with the in-crowd amidst Bangkok’s fickle foodie scene, you already know that Thai black pork has been a mad trend over the last four or five years.

Thailand is a bit behind the rest of the world on valuing the meat of the black pig. England’s Berkshire black pigs have been praised for centuries, and Kurobuta — which simply means ‘black pig’ in Japanese – is almost as popular an export for Japan as Wagyu and Kobe beef. In Korea, pork lovers are crazy for Jeju Black Pig, a small domestic pig found on the island of Jeju-do. Then there’s pata negra (black hoof), the Iberian black pig of Spain and Portugal.

It wasn’t that many years ago that Thais considered black pigs to be the exclusive domain of northern Thai hill tribes, who presumably lacked the cash for fat white hogs with bloodlines stretching back to Denmark, Belgium, England, or New Jersey.

Over the last three or four years, that once-widespread attitude has been changing. Chandler Schultz, manager of Avril Gourmet shop in King Power Mahanakhon and former head chef at Le Cochon Blanc (which ironically means ‘the white pig’ in French), is a big fan of local black pork, for example.

“Wherever I work, I tend to use only the finest imported ingredients,” says Schultz. “I’ve imported probably the best butter in the world, I go for amazing Atlantic seafood, and really great Australian beef. I believe those products are the best, so that’s what I use.

“But when it comes to pork, I would rather serve Thai-raised black pork than Japanese Kurobuta or Spanish Iberico. It’s the marbling, the texture, and most of all the flavor of local black pork that sets it apart from anything else I’ve tried.”

I recently visited a pig farm in Sanpatong, about 30 kilometers south of Chiang Mai, owned by American ex-pat Randall Ellis. After a successful IT consulting career in the States, Ellis came to northern Thailand, married a woman named Surin from Sanpatong and established Surin Farm on three rai near her village.

“I fell in love with the pigs very quickly,” Ellis said while showing me around his exceedingly well-kept farm. “They’re smart, they love people if you treat them well, and they grow a lot of meat real fast.”

Ellis’s farm caters to three main local markets. Piglets reared from birth to around 25 days old are sold to Thais who are raising a few pigs on smaller farms along with other animals. Some also go to Thai farmers who are establishing satellite pig farms as part of a cooperative Ellis hopes will help maintain steady supply lines to Bangkok.

The farm’s surprising middle-market buys small- to medium-sized pigs to offer at village ceremonies and feasts. In fact, many of northern Thailand’s mountain inhabitants raise pigs primarily as a source of sacrificial animals for spirit worship, to assure against possible financial difficulty or crop failure. Hilltribe peoples won’t use white pigs for such purposes; using anything other than native lack pigs goes against their beliefs.

But the high-dollar market, for Ellis’ farm, consists of hogs he raises up to at least 100 to 110 kilograms, the optimum weight for the finest cuts of pork. Although many of Surin Farm’s 500+ pigs are red Duroc or white Landrace, black pigs take on the most value because of their highly desirable pork, especially among chefs and consumers in Thailand’s ever-growing fine-dining arena. Surin Farm pigs from this market level are sold under the cozily named Family Farms label.

Ellis treats his pigs exceptionally well. Farm pens are designed to allow plenty of space for exercise (Ellis refuses to follow the free-range trend, believing it puts the animals at greater risk of infection), and are cleaned twice a day. Only a few meters outside the pens, his pig farm is virtually odor-free. The farm is ringed by trees and thick vegetation, whose leaves capture drifting smells which are then rinsed into the ground when it rains. The chemical-free farm also employs a small methane gas plant to clean wastewater and protect the air.

For his efforts, Thailand’s Department of Livestock Development (DLD) has certified Surin Farm as a training farm for pig farmers around the country seeking more sustainable methods of animal husbandry. The United Nations Environment, Asia, and the Pacific Office in Bangkok has also recognized the farm as a model of sustainability.

But it’s not just keeping a clean shop that makes the farm’s black pork taste so good. “First off you have to find the best pigs for breeding,” says Ellis. “Then you have to feed them right and keep them healthy. We don’t use hormones and will only resort to antibiotics when an animal is actually ill.”

“Equally important is to treat the pigs with loving care right up until harvesting when we arrange a quick and humane death. Lots of studies show that stressed-out pigs deliver lousy meat.”

I toured the farm accompanied by Antony Scholtmeyer, executive chef at Capella Bangkok, a luxury hotel on the banks of the Chao Phraya River. Scholtmeyer, who formerly helmed Michelin-starred Elements at the Okura Prestige, was equally impressed with our stroll through the pig pens.

Scholtmeyer made contact with Ellis in order to establish a steady supply of black pigs for the Capella’s commissary-style kitchen, which buys primal (basic large portions of the pig, numbering three or four) and then do the butchering on-site at the hotel.

“That way we can get exactly the cuts we want, and they’re fresh,” says the chef. “We also make our own bacon, sausages, smoked hams, and our own French-style charcuterie such as pates and terrines. We’ll go for porchetta, chops, loins, and fillets for main menu items, and turn the bits and pieces into other things.”

Ellis’s staff grilled thick slabs of pork loin in the farm kitchen for Scholtmeyer and myself to try. Both Scholtmeyer and I agreed it was an amazing mouth experience. “The wagyu of the pork world!” he proclaimed.

Even buying large primal, the cost of the black pig is high, but for Scholtmeyer it’s not an issue. “It’s all about value in context,” he says. “And in our context black pork carries good value for the money. It’s a premium product, so we charge a premium price.” “I also like that it’s a local product. As a chef concerned with the local economy and sustainability, I try to use products that are as authentic and local as possible. Plus, the Thai black pig comes with a story, a mystique about it, that sells, like Thailand itself.” 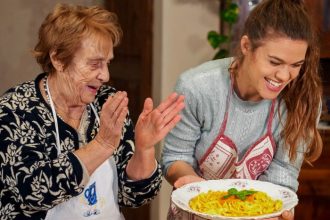