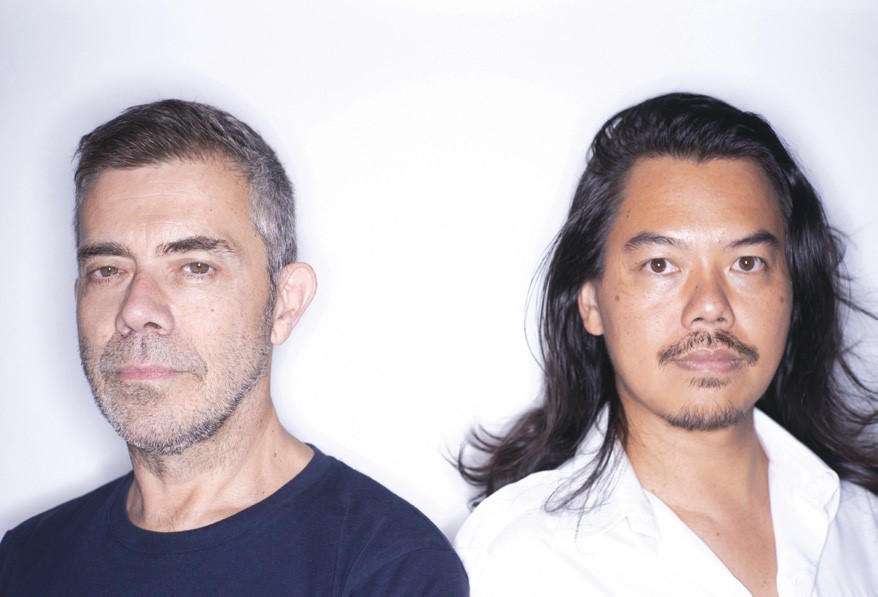 An East-meets-West couple converge their artistic visions and talents with traditional artistry and contemporary aesthetics.

Now the two worlds of East and West meet and mingle like there are no boundaries. Rush Pleansuk and Philippe Moisan combine Thai and French artistic sensibilities in their romantic and professional partnership. While Philippe mainly uses his keen eyes in photography, Rush wears many hats at Sumphat gallery as a furniture, product and interior designer, a craft and design consultant as well as an architect, columnist and artist. They interconnect design philosophy, functionality and artistic values into a profound interpretation.

Before becoming an award-winning designer, Rush earned his bachelor’s degree in architecture from Kasetsart University in Bangkok. He furthered his studies in “Timber design and construction” at the School of Architecture and Landscape in Bordeaux, France. Rush explains, “I think that studying architecture in Thailand concerns more about science than art. I wanted to learn about the source of inspiration and design so I chose France because as a source of creativity, it’s more liberal. I studied woodwork, such as architecture, interior, and crafts with wood.”

Rush continues: “I was a design consultant for a furniture brand, Plato. I questioned why the products that I designed devalued quickly. We use teak, which is of high quality but after five years the furniture devalues. We have to find a story and a process that are rare. I then worked at Serax Maison d’être in Belgium and Harto Design in France. Later I started to receive these awards and was asked by the government to work on community projects. I have more authority in my  own companies but gain more compassion and flexibility in these projects. I have to learn  and understand the community’s history and methods, which are the key point of values in crafts. What makes a good piece of antique? It’s a combination of good materials, methods and stories. I have to prove myself in a big role at Sumphat from the brand’s point of view, history, and lifestyle with Philippe and the team. I initiate and influence but still need the team’s continuation. The quality of relationship within the team is also important.”

Rush muses: “I get inspiration from two different points—luxury art product design and community projects. For art products, they come from telling stories from the past through culture, history and origin. Philippe has travelled a lot and profits from that. Museums, stories, history, and process of thinking and making are all synthesized into the products.”

He adds: “Community projects require problem solving on how to sustain the society and make it better. Many factors are involved in thinking. The passing of King Rama IX and the words from HM’s speeches inspire me to work for the locals. I study HM’s work and am proud of my country. Often Thai students who study overseas think that foreign countries are better. However, I want these communities not only to survive but also to develop. On one project, I decided to work with people with multiple disabilities. They are very talented. They weave lipao fern basketry, which is very intricate and delicate. I can’t even make them. In another project on forest protection in Tak province, we use wild honey gatherers to counter the conflicts. They help buffer the deforestation that keeps invading by the villagers into the mountains. We have to teach them that trees have more value than just being fuel or not turning forests into corn fields. I have to solve these problems to their core and hold the responsibility to ensure that it’s sustainable in the long term, as in King Rama IX’s speeches.”

In the 1960s during the height of hippies and the sexual revolution, Philippe Moisan was born in Montmartre, Paris. Living among artists, his graphic-artist parents are a mélange of bourgeois-bohemian. His maternal grandfather, Roland Moisan, was a well-known artist and political cartoonist for Canard enchaîné, a satirical French newspaper. He was exposed to the world of art via his family friends who are painters, photographers, poets, writers, and actors. After the life of bobo’s joie-de-vivre, he was schooled in Versailles with stricter social code and complexity. There he discovered dramatic arts at Théâtre Montansier by the château.

Impressed by the Indiana Jones’ character, the adventurous archaeologist, Philippe studied at École du Louvre with a dream to become a museum curator. There he learned classic French art, Far-eastern art, and Egyptology. During the Cold War, his duty in the French army brought him to Berlin, where the best of music and opera occasionally helped warm his routine existence.

After returning to Paris, Philippe’s life of pleasure resumed amidst the party scenes at nightclubs like Le Palace and Les Bains-Douches, where he socialized with the fashion crowd. Among these, he met Spela Lenarcic, one of Karl Lagerfeld’s models who became a fashion editor for Numéro magazine. He travelled with her to exotic locations such as the Antilles. Although his father was surrounded by great photographers like Henri Cartier-Bresson and Helmut Newton, Philippe discovered photography in his 30s during these trips. His black-and-white photos of Spela against the black volcanic beach impressed the modelling agent. He then learned commercial photography and started shooting model portfolios. Later he worked for several magazines, travelled widely in Europe, Asia, and the US, and eventually spent 12 years working in fashion and advertising photography in Brazil.

After decades of beauty, ease and fun, Philippe felt that something was missing. He began to look at the world without models. He says, “I finally realized that I should just take photos of the streets or towns. I left Brazil and had my works exhibited at Paris Photo and during Mois de la Photo. Then I had enough of big cities, like New York, Los Angeles, and Miami. I wanted to relax in Bangkok. I hadn’t been to Thailand before and my mental image of it was that it’s quiet. My crazy idea was based upon the Silk Road and looking at people meditating, doing Tai Chi or Qigong on the islands. However, Asia is changing and rising quickly, and Bangkok is one of the craziest places!”

As fate would have it, Rush and Philippe met 10 years ago and have collaborated for four years. They have combined their talents in architecture, design and photography. Rush says, “Our designs emerge from cultures, communication, connection, vibrancy and movement. As a single piece, it may lose the sense. Within a series, the pieces build stories, spirit, soul, sense and meaning about their origin.” Philippe adds, “At first when I thought of working together, I wanted to brake and stop. I was unsure and the images of quarrels at home hindered me from repeating the history. Now each time I see his works in all the process, they remind me of the trees, the forests, and photos mixing and connecting together.” Rush says, “Now I discover our common point of Sumphat that we are like archaeologists searching for rare things or hidden jewels and presenting them to the world, like I found Philippe, who’s a treasure. He has a deep background and rich experience. That’s hard to find.”

Besides being a design director of Sumphat, Rush is also a sculpture artist under the alias of Gaspard. His first sculpture exhibition “Genii-Loci” was shown in 2014. Rush reflects, “These art pieces are expressions of my feelings. It’s my personal vision of what we see in the ruins of the city of Bangkok. The design pieces that I’m most proud of is the brass collection that’s related to gilded lacquer works. First, the ‘Lublae’ partition screen are panels of rain and seasons in ‘lai rod nahm’ gold lacquer. They represent human life through seasons—summer, monsoon and dry season, accented with gold leaves and glitter like Japanese urushi lacquerware. I want to continue the craftsmanship such as brasswork.”

Philippe explains, “The brasswork series is inspired by ‘dton koi’ or Siamese roughbush and antiques. The ‘tree tables’ designed for displaying merchandise in Jim Thompson shops strongly impress me. With good directions, this design is special. These iconic brass tables are the germination or the beginning of creations. They are strong yet thin and poetic.” Rush adds, “Dton koi leads the design of this whole series. These ‘mai dud’ bonsai or Thai-style topiary can be seen in Wat Klongtoey Nai. Training each branch may take up to 25 years. Thais’ design characteristics are not sloppy but well-ordered and calculated. These trees arrived in Ayutthaya period and palace courtiers like sipping tea and critiquing bonsais. History helps shape furniture. The past will tell you the form and what you should follow.”

Rush concludes, “In future I want to start an art and design movement and gallery to have functional, luxury, and valuable pieces that come from good intention and attention. I prefer quality to quantity.” As multi-disciplinary artists, this cross-cultural couple adapts, blends, modifies, and transforms their global thinking into universal things.

A Bangkok-born and internationally bred aesthete, Dr Tom Vitayakul brings the best stories of creative minds and artistic souls to life from traditional to contemporary, to avant-garde about their visions, inspirations and creations 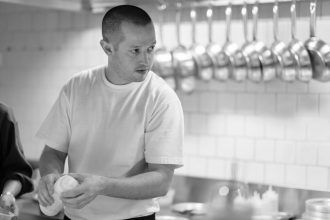 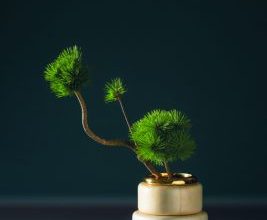 A Day in The Life of An Environmental Manager