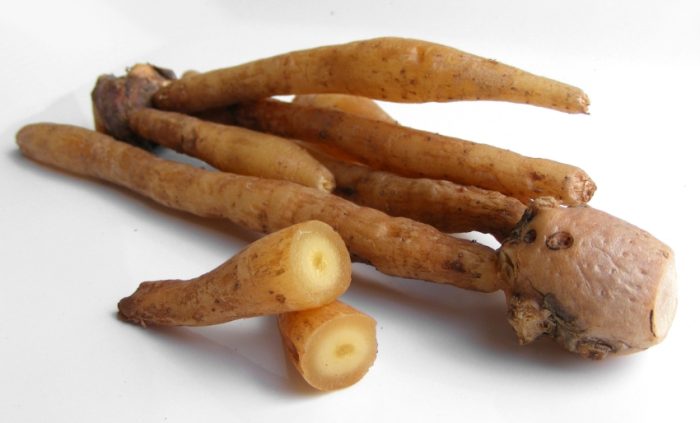 Krachai is technically a rhizome rather than a root – that is, it’s an underground stem from which leaves and roots grow.

It’s late morning in the northern Thai province of Chiang Mai. The temperature remains pleasantly cool, though the strong sun beaming into the kitchen hints at the glaring heat that’ll greet us as midday approaches. Before me on the round, wooden chopping board lie awkward-looking clusters of slender, beige digits – somewhat reminiscent of The Simpsons character, Mr. Burns’, creepy hands.

Aside from casting the odd, distracted gaze over it in the vegetable section of the supermarket, this is really the first time I’ve closely examined the aptly named ‘fingerroot’- or in Thai, krachai.  While hailing from the same botanical family as ginger (zingiberaceae), krachai’s appearance is quite distinct from that of its chunkier, sturdier cousin; so, too, are its aroma and taste.  The former contains delicate notes of mild ginger and black pepper, while the latter reveals hints of earthy bitterness – and a piquant, raw spiciness that lingers on the palate.

Krachai (scientific name: Boesenbergia rotunda; other names: lesser galangal, Chinese ginger, Chinese key) is technically a rhizome rather than a root – that is, it’s an underground stem from which leaves and roots grow. It’s prevalent across southern China and Southeast Asia, though it’s curiously not widely used as an aromatic – except in Thailand.

I remove a few ‘fingers’ from the ‘hand’ and cut them into thin slices, before placing them in the large stone mortar containing other herbs and spices. I am learning how to make khao soy – the signature northern Thai dish of soft and crispy egg noodles and fall-off-the-bone chicken, in a fragrant, spicy coconut-curry broth.  Krachai is a key ingredient, giving the classic dish its world-renowned distinctive aroma and character.  The rhizome is not, however, unique to the cuisine of the Thai highlands alone; indeed, it’s a common culinary ingredient across the country.  In the central region, it may be found in gaeng som, a spicy-sour vegetable soup, gaeng liang, a herby, vegetable soup with prawns, ho mok, a steamed curry, and kanom chin, fermented rice vermicelli typically eaten with fish curry. In the southern region, its fragrance and spicy heat are a complement to many seafood-based dishes, including the well-known gaeng tai pla, or fish innards in sour soup – helping as it does to moderate the smell of the otherwise odorous viscera.

In both Thailand and other regions of Southeast Asia, krachai has also long been used for medicinal purposes – typically to treat stomach discomfort and peptic ulcers. Considered a ‘hot’ herb, it’s said to be a remedy for flatulence, indigestion, and a general diuretic.  It’s prepared by mashing the fresh root with a mortar and pestle, from which a decoction can be made; alternatively, it’s dried or fire-roasted and made into a powder. Tea made from krachai leaves can be taken to moderate food poisoning and allergic reactions to food.

Most recently, though, the rhizome has come to the attention of the Thai public at large following the global COVID-19 pandemic.  With the concerning spread of the virus coupled with, for a time, the country’s vaccine shortage, the Thai public, government, and scientific community have been looking to traditional Thai medicinal herbs as an alternative therapy.  As early as 2020, research surfaced hinting at the potential efficacy of the bioactive compound in krachai, Panduratin A, as an anti-viral, both pre-and post-infection.  This was, however, based on in vitro tests only.  Compared to fah talai jone, or green chiretta (covered in the last edition of Kitchen Backstories), there is significantly less scientific evidence proving the efficacy of krachai in combating COVID-19; also, unlike fah talai jone, it is not yet on the government list of herbs that may be used to allay the symptoms of the virus.  This said, the past two years have seen a spate of research papers emerge supporting earlier conclusions; moreover, clinical trials by the Department of Thai Traditional and Alternative Medicine and Mahidol University, using the compounds to combat COVID-19, were underway in 2021.

The economic benefits of this growing interest in krachai have not been ignored, either. In July 2021, farmers in Nakhon Sawan were earning up to 5,000-7,000 baht per day selling the rhizome.  However, with every ‘gold rush’ there are also inevitably opportunists; false claims made by advertisers of krachai herbal products led Mahidol University to issue a statement that it in no way stated that krachai is an effective medicine for treating COVID-19 symptoms – cautioning that early in vitro research results should not be prematurely extrapolated to its efficacy in combating COVID-19 in humans.

By now, I am resting my pestle-worn right bicep, as the chicken cooks slowly in the fragrant, orange-tinted coconut milk broth.  It occurs to me that I could use this time to also juice the leftover remaining roots – another traditional Thai way of consuming krachai, typically with a little lime and honey. And, so I do.

Finally, it’s lunchtime, and my fellow students and I gather to indulge in our hard-earned meal.  The khao soy is at once warm and comforting, zingy and reviving – and contented sighs are released around the table.  Is this invigorating feeling coming from the krachai? I’d like to think it is – but, apparently, only a lab test can tell me if I’m imagining it or not.

Disclaimer: Information provided in this article does not constitute medical advice, and opinions expressed are the author’s own. Please consult a licensed physician before attempting to use krachai or other herbs for medicinal purposes.

FotoosVanRobin from the Netherlands, via Wikimedia Commons 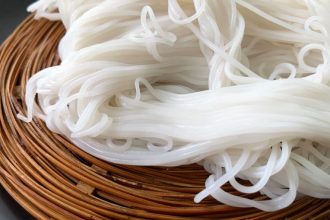