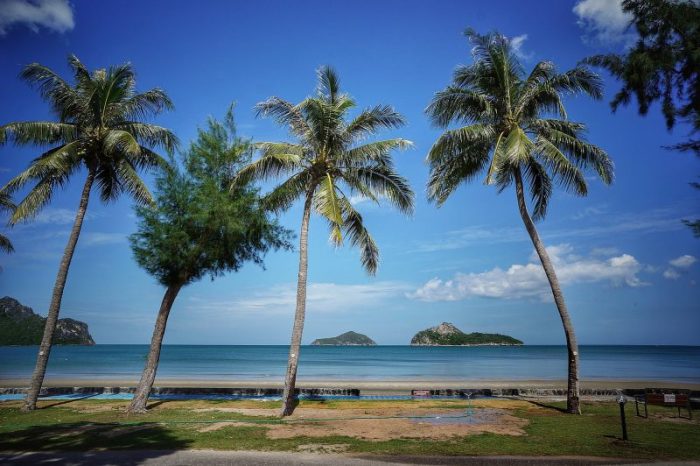 On weekends and holidays, thousands of Bangkokians trade urban grit and smoke for sun and sand at beaches in and around Hua Hin and Cha-am. Just two and a half hour’s drive from Bangkok, these Gulf of Thailand resorts are well-equipped for tourism, with a huge variety of accommodations ranging from semi-squalid to luxurious.

For those who find this stretch of coastline too well-developed or lacking in local character, or for those who have simply done Hua Hin to death and are on the lookout for somewhere new, Prachuap Khiri Khan, an hour further south along Highway 4, might be just the ticket.

Farming and fishing are still the main livelihoods in the area, and nightlife is virtually nonexistent. Fresh seafood is abundant and inexpensive. Mountains to the west of town extend from the Tanintharyi Mountain Range in neighbouring Myanmar, with foothills and rock formations coming down to the coast to form small uninhabited islands just offshore. Thailand reaches its narrowest width in this district, with only 12 kilometres between the Thai-Myanmar border checkpoint of Dan Singkhon and the Gulf of Thailand at one point.

Although driving is the fastest way to reach Prachuap, riding the train from Bangkok offers an appealing alternative that matches the town’s old-school ambience. Eight trains a day make the five-hour trip from Bangkok to Prachuap’s quaint, 1914-vintage teak-plank railway station.

From the station, stroll straight down Kongkiat Road, a charming street flanked by pre-1970s two-story shophouses of the sort that long ago disappeared from Hua Hin. Even if you’ve booked a room elsewhere, stop over at Yuttichai Hotel, one of the last old-school wooden hotels found anywhere in the province, for a beer or cup of coffee in the open-air lobby downstairs.

Sala Cheep Road, one street west of the bayfront, is another good spot for admiring older wooden houses and shops. A sprinkling of home-grown cafes and eateries make Sala Cheep a popular local gathering spot in the late afternoon and early evening.

Prachuap district boasts three large sandy bays. However, unlike in Hua Hin and Cha-am, there are no beachfront hotels or resorts here, which explains in large part why the town seems so well-preserved. Fronting town centre is the eight-kilometre Ao Prachuap, where there’s a long recreational pier popular with young couples on evening strolls. The largest of three bays, it extends north along a narrow, scenic cape that separates Ao Prachuap from an inland lagoon-and-canal system. The canals are filled with colourful fishing boats, and a well-constructed promenade along the sea here offers the opportunity to enjoy jogging and cycling with scenic views.

At the north edge of town, a tall limestone crag called Khao Chong Krajok (Mirror Tunnel Mountain) is named for a huge oval-shaped hole in the formation, which, when viewed from the west, appears to reflect the sky and sea like a mirror. A winding set of 395 steep steps leads to Wat Thammikaram, a hilltop monastery built by order of Rama VI. Along the way, various pavilions offer panoramas of Ao Prachuap. Take care around the longtail macaques residing on the forested hill, as they can be predatory towards any hikers carrying food.

A much smaller hill, Khao Mong Lai, sits at the north end of Ao Prachuap and offers a more easily accessed viewpoint. On the other side of the cape to the north lies the sandy fishing cove of Ao Noi, and yet another monastery-topped hill. Wat Ao Noi boasts an impressive chapel made entirely of golden teak and decorated with elaborate Thai Buddhist paintings. Nearby Tham Phra Non (Reclining Buddha Cave) is occupied by two large reclining Buddha images adorned with yellow robes.

The most impressive of Prachuap’s three bays, Ao Manao (Lime Bay) is a beautiful curve of powdery sand backed by tall coastal pines five kilometers south of town. Located inside Wing 5 airbase, where commercial development is strictly curtailed, the beach is wonderfully preserved and open to all, free of charge. Swimming is excellent here, and the pines provide plenty of shade for local picknickers.

Khao Lom Muak, a rocky hill at the north end of Ao Manao, is home to more than 200 dusky leaf monkeys, also known as spectacled langurs. Unlike the naughty macaques at Khao Chong Krajok, the monkeys here tend not to behave aggressively.

Of historical note, on Dec. 8, 1941, Ao Manao was the point where the Imperial Japanese Navy made landfall in Japan’s successful bid to occupy Thailand during World War II.

The south end of Ao Manao gives way to a national forest preserve, followed by a series of lesser-known bays and beaches. Just south of the preserve, a huge freshwater stream called Khlong Wan feeds into the sea south of the preserve. The name, which means Whale Canal, is a reference to Eden’s whale, a frequent visitor to the coastline throughout Prachuap district and beyond. Named in honor of Sir Ashley Eden, a high commissioner in colonial Burma (Myanmar), the small baleen whale grows up to 12 metres long and is often seen swimming close to shore in all three bays and as far north as Kuiburi.

Kuiburi National Park, around 35 kilometers north of Prachuap, is a protected habitat for the largest herd of wild elephants in Thailand, as well as impressive numbers of gaur, also known as Indian bison. These threatened wild cattle, native to Thailand, are the largest bovids in the world, with adult males weighing up to 1,500 kilos. By prior arrangement, park rangers lead pickup safaris through the park, during which elephants and gaur are easily spotted.

Further north along the coast, Sam Roi Yot National Park was Thailand’s first coastal preserve, with 98 square kilometres of limestone mountains, mangrove wetlands, sea ponds, beaches and limestone caves. Phraya Nakhon Cave is famed for a Buddha pavilion which catches sunlight beaming in from a sinkhole roof. Last year, archaeologists found a group of 3,000-year-old paintings in a cave at the park, with renderings of humanlike figures, animals and bow-and-arrow hunt scenes.

Thai foodies say Prachuap offers the best-priced fresh seafood anywhere along the gulf. We can vouch for Rap Lom (Gathering Breeze, Tel. 032601677), a semi-outdoor place a couple of kilometres north of Khao Chong Krajok on Ao Prachuap. Crab, caught fresh off the shores of Ao Noi, is highly recommended.

You won’t find any five-star resorts in Prachuap Khiri Khan. The classic Yuttichai Hotel (115 Kongkiat Rd, Tel. 032611055) offers inexpensive fan and air-con rooms and a cosy coffeeshop downstairs. Hadthong Hotel (21 Susuek Rd, Tel. 032601050, www.hadthong.com), the first multi-story hotel to open in Prachuap Khiri Khan, is popular for its rooms facing the sea, and boasts a swimming pool and restaurant. The most upscale accommodations in town are available at Zea Zide Hotel (Tel. 0829176465, facebook.com/zeazidehotel), where all rooms face the bay and include functional balconies. Inside Wing 5 airbase, Ao Manao Beach Hotel (tel 032661088) offers large, plain rooms with private terraces that afford stunning views of Ao Manao. Although originally for the exclusive use of Thai air force personnel and their families, nowadays everyone is welcome. 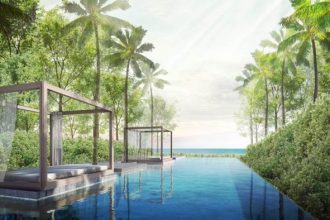 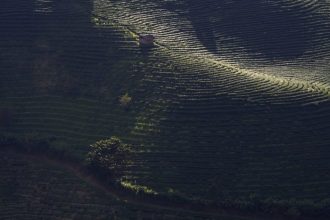 Mae Salong – Along The Way 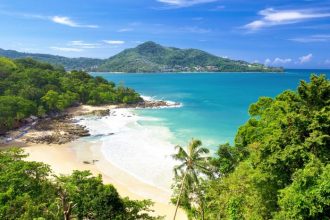