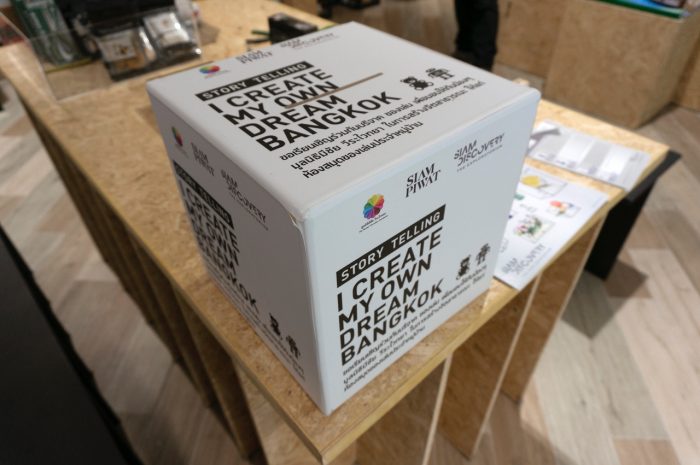 Infamously ‘unplanned’ Bangkok is actually a mess of inappropriate planning. Yet a wave of independent young urbanists might herald the possibility of the ‘Creative Bureaucrat’ movement happening here.

Chaotic, messy, unplanned. That’s the cliché of Bangkok’s helter-skelter development in recent decades. Many advocate the solution as “more planning.” Yet Bangkok has had plenty of plans, which are partly responsible for the mess. Problem is, the city plans haven’t suited Bangkok and its unique urban character.

Krung Thep’s full Sanskrit name articulates how the city was first planned according to Hindu-Buddhist cosmology. It later absorbed layouts of Chinese geomancy, colonial models and European boulevard grids. Since World War II, Thai city plans followed the American obsession with cars, corporations, malls, zoning and suburbs, disregarding the waterways, laneways and ethnic communities as obstacles to modernity. Recent development bears the imprint of a 1990s plan by the Massachusetts Institute of Technology. As a result, mass transit, parks and public facilities have been squeezed in awkwardly as afterthoughts. Heritage plans only protect what supports the nationalist ideology, leaving the indigenous urban fabric to fray or be swept away.

Those plans were imposed opaquely by officials without much consultation. The chaos of Bangkok street is less the fault of those with little option but to trade in “public space,” rather than the failure of planners to address the needs of the vast informal sector. And besides, the influential can evade the selective enforcement to build with impunity, spreading chaos from above.

“In every direction, Bangkok is guided by business or officials in a way that people cannot stop,” said Zcongklod Bangkyikhan, travel writer and former editor of a day magazine. “We don’t have a voice. We cannot do anything. Bangkok doesn’t belong to us.”

Yet Bangkokians are starting to claim a role in their city. As both Thailand and the globe became minority-rural in recent years, urbanism has become a sexy topic for educated young citizens worldwide, Thais included. Ever more of them make it their mission to improve urban life.

The practical catalyst for this shift was the boom in bicycles. A new breed of cyclists, like Zcongklod, the founding editor of Human Ride magazine, felt every bump of how poorly (and dangerously) the city was designed. Behind their first-hand experience of routing, shade and surfaces, thousands of cyclists were for the first time exploring their own city. By seeking out unfamiliar places of interest, they gained both local knowledge of communities where cars can’t penetrate and comprehension of the city as an organic, integrated whole. Their insights sped beyond the knowledge and mindset of status-driven bureaucrats or chauffeur-driven developers.

The next step was for concerned, informed citizens to take matters into their own hands. “There are increasing ‘pockets of resistance’ – ‘pockets of hope’ – throughout the city,” writes Kannika Ratanapridakul. “They tend to… view [the city] as a ‘self-organizing structure’ that is alive and should be allowed the freedom to grow more naturally, with minimal guidance, monitoring and maintenance because nature has a way of balancing itself much more effectively than our best complex theory of urban planning ever could.”

Urban issues have since become a mainstay of media and academia, art and design. City issues get showcased to festival-goers, at such events as BangkokEdge, Art In Soi and Bangkok Design Week. Activist urbanites have fuelled the wave of social enterprises like Satarana or Shma SoEn, campaigns like Friends of the River, and independent projects like Creative District or WePark. The latter, devised by Yosopon Boonsom of Shma SoEn, envisages a loop of landscaped cycle paths and leisure areas under expressways to link-up distant parks.

The Bangrak-Klongsan Creative District was founded specifically because so little could be achieved through the bureaucracy to revive those run-down riverside areas. Architects and activists joined communities and local businesses, including the Bangkok River association and de facto leadership by starchitect Duangrit Bunnag, creator of the Jam Factory and Warehouse 30 cultural venues. Unlike the actual City Hall, the Creative District’s “Town Hall Meetings” invited all stakeholders and enabled anyone to suggest potential schemes, or showcase progressive ventures that sought premises or permissions.

At street level, the Creative District’s cooperative initiatives created through-ways to link dead-end lanes, and attracted enterprises and amenities to help the area flourish. Now (mostly young) Bangkokians cross town to enjoy the new installations and venues in grungy neighbourhoods they wouldn’t have entered before. This has so successfully revitalised the districts that belated attention by corporations and the state raises the spectre of gentrification.

The greatest galvanising impetus was the catastrophic junta plan to impose a high, broad promenade-cum-flood wall along 14 kilometres of the Chao Phraya. The eyesore would ruin the views from and to the river, dangerously narrow the space for boat traffic, block 14 hectares of water from light, stir bank-undermining currents, and sever the ancient bond with the aquatic culture of Bangkok’s oldest quarters. Most brazen was the salivating at deals to pour miles of lucrative concrete and the eviction of 29 old communities from prime waterfront real estate. The claimed purpose to serve cyclists misses the reality that cyclists want charming, varied locales to wend through, not a monotonous river highway that, by coincidence, officials have been scheming for decades to build.

The plan outraged so many citizens and businesses that the Friends of the River campaign swelled into one of Bangkok’s biggest civic causes. The prom has been halted, but like the Bang Khrua expressway link or the eviction of Pom Mahakan community, such pet projects have a knack of never dying in the planner’s mind, regardless of being discredited by everyone else.

“The major obstacle against successful development is that Bangkok is being developed by people who lack real understanding about development,” said a Thai resident in the book Asian Alterity. “Decision-makers never genuinely listen to the people, resulting in development which is without people participation and therefore ineffective and unsustainable.”

Over the past few years, state officials have faced eloquent competition from young professionals with superior skills, awareness and understanding of both international trends and quality standards. They know what’s achievable elsewhere and want it for their hometown.

This July, Bangkok Design Week, the EU and Yosopon from Shma hosted a remarkably open online forum that would have been unthinkable a few years ago. It featured young landscape designers and experts from abroad discussing “New Green Possibilities” with official Bangkok planners, who until recently had a monopoly on imposing top-down mega projects without consultation. Webcast live and enabling public questions, its four panels featured contributors speaking about design, business, policy and the platforms that breed eco-sensitive ventures.

Platforms matter. Aside from the increase in dedicated forums for urban topics, many independent planning projects get brought to public attention at events for likeminded citizens, like cycling festivals, the Art Book Fair, mall displays or the Great Outdoor Market. Most importantly, social media enables urbanists to reach millions, share memes and motivate mass support. That’s not just raising alerts on any civic abominations, but celebrating the succession of excellent recent projects.

Ultimately, indie initiatives can’t take the place of the state, but they can spur an upgrade of local planning. Charles Landry, the founder of the Creative Cities movement, startled his followers by establishing the Creative Bureaucracy Festival. It sounds counter-intuitive, but good urban projects around the world are often the work of officials with vision, drive and capability. Bangkok will stand its best chance when the planning offices are filled with inspiring creative leaders, and when plans support—not stifle—the city’s inherent vitality.

It’s a long struggle for Bangkok to gain enough Creative Bureaucrats, when we wince at the “beautification” by officials at sites like Khlong Padung Krung Kasem, with its gaudy benches and giant rabbit statue. The Bangkok Metropolitan Authority (BMA) has been trying harder, especially in adding a new park a year. When Benjakitti Park was created in the 2000s, its mature lakeside raintrees were replaced with unshaded concrete. Its later extension into the Thailand Tobacco Monopoly was a dire grid that kept the former factory layout. But there’s hope; the latest phase of that greensward is keeping its big trees, terraforming new lakes and installing aerial walkways into Bangkok Forest Park.

A practical reason why public facilities have often been ugly and inappropriate is that, astoundingly, the BMA had always landscaped the city without landscape architects. BMA schemes were done by engineers or contractors untrained in the landscape architect skillset of aesthetics, ecology, heritage and social usage. It legally couldn’t, because “landscape architect” wasn’t on the BMA’s list of approved professional associations. But in 2019, an association of landscape architects was approved, and the shift is bearing fruit.

One encouragement is that many new projects are generated by the Urban Design and Development Center (UddC), a semi-independent unit under Chulalongkorn University, with some state funding. UddC is run by experts and staffed by keen young landscape architects who are motivated and knowledgeable about urban renewal. By 2020 we got the garden SkyBridge and festive walking streets flanking Khlong Ong Ang, which connect to provide a new pedestrian route that links old communities on two sides of the river.

In the “New Green Possibilities” forum, one Italian speaker also pointed out drawbacks to public input. Impractical schemes by idealists without expertise stand little chance of getting built or helping the cause. She found the best format is to consult stakeholders and put forward flagship projects that take account of things like environment, society and mobility. When beneficial projects get realised, the public feels heard, so they often form an attachment, as with Khlong Ong Ang. A speaker form Singapore added that the public soon lets government know that this is something they’re prepared to pay for. Consultation can start a virtuous circle.

Covid lockdowns have highlighted the need for more outdoor space, which drew many to discover “The Green Mile,” Bangkok’s first cycle path, built in 1999 by its first eco-aware Governor, Bhichit Rattakul. UddC will now improve this part-elevated canalside link between Lumpini Park and Bangkok Forest Park.

When it comes to marking Bangkok’s 250th anniversary as capital in 2032, it’s refreshing that rather than hire a developer to build some monumental boondoggle, the BMA tasked UddC to upgrade quality of life with what’s already here. UddC plan incremental gains at “intervention points,” such as conserving Kudi Jeen community, integrating Victory Monument’s hospitals into a “Wellness District,” turning Saphan Taksin’s BTS-connected pier into a mass transit hub, and landscaping a disused canal into a leisure space between Sois Thonglor and Ekamai.

The lesson is to enhance what’s good about Bangkok, in a way that makes the best of its character, rather than trying to dress as something it’s not. “Bangkok is the best city in the world. No seriously, I’m talking the truth,” Duangrit said at the launch of his Bangkok Manifesto, enthusing a crowd of young urbanists as the BangkokEdge ideas festival. “If you start from that, you become less problematic about what exists in the city. Getting to know the city as it is, you start to see new possibilities.” 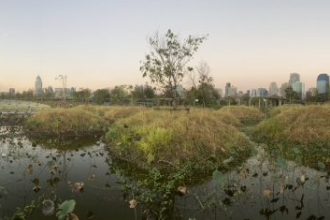 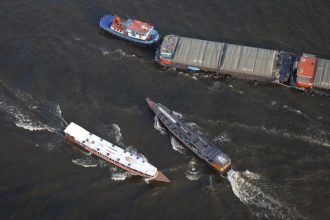 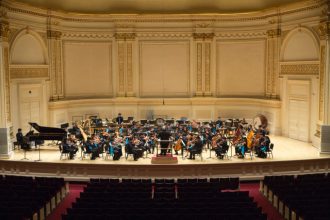