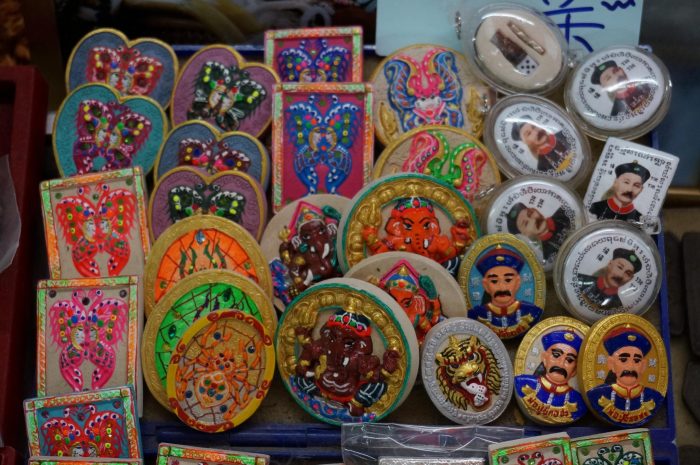 How new kinds of lucky charms enchant the public and upset propriety.

The eclectic nature of Thai Buddhism hit the headlines in a recent craze for edible amulets that riled guardians of orthodoxy, but there is a constant churn in new pop expressions of belief. In amulet markets, you can’t miss the contrast between the dulled patina of old bronze artefacts and the gaudy bling of trendy talismans, cast in resin or spangled in neon hues, glitter or faux coloured gems.

Amulet design has also shifted in emotional impact – from conformist to creepy or cute. Anxious times have wrought a cult of amulets for wielding magic, with fetish objects bound like voodoo dolls in waxed string, dripped with wax, or submerged in sorcerer’s oil. Others seek refuge in portraying innocence, with effigies getting babyish through chubbier profiles and cartoon eyes.

Phra Khreuang (Buddhist clay tablets) originated as time capsules buried under stupas to be unearthed to spread the Dharma in a time of declining faith. That would be our consumerist era. While some collect antique phra khreuang, others produce novel ones that reflect social mores, whether depicting charismatic monks, bearing slogans like ruay (rich), or incorporating dyes, swirls of particoloured particles or daubs of acrylic paint. Some claim magical ingredients like ashes or antler, herbs or bone.

In the latest twist, a pâtissier in Samut Songkhram, Madam Choops, moulded Buddha tablets from the Thai dessert ah lua. This gelatinous snack is made from coconut, wheat flour and kwan tian (jasmine candle smoke) to add fragrance. A 100-baht box of 20 contained many designs in vivid colours, dusted with gold leaf. Madam Choop’s Facebook page went viral, with thousands of comments and shares under the hashtag #อาลัวพระเครื่อง (Ah Lua Phra Khreuang). Many delighted in her creativity, craft skill and sincerity. While some responded with humour, conservatives condemned the cake charms as improper.

The head of the National Office of Buddhism demanded that Madam Choops stop and apologise for such an “inappropriate,” “disrespectful” thing that would cause “misunderstandings.” Columnists pointed out the irony that clinging to images, authority and rigid rules was against Buddha’s teachings on non-attachment.

The notion of eating amulets is theologically queasy, but like other perishable offerings such as lotus buds, they teach impermanence. Akin to garlands and incense, their scent spreads the Dharma aromatically. Like temple gilding and glass mosaic, their gold leaf and translucent hues spread Dharma though light. Their precision conveys the Dharmic messages of Buddha postures. Few objects spread Buddhism in as many ways.

The official worried that this bad example, if unpunished, would encourage further unacceptable amulets. This worry is as ancient as belief in charms, spirits and spells. Throughout history, practical folk Buddhism has kept changing and spawned practises deemed unacceptable. Purges of folk beliefs also recur, especially by new regimes that claim legitimacy through moralism.

Few charms enchant or offend like the palad khik penis talisman, a token of abundance found nestled in many a shop till. Bangkok’s most awkward sight is the phallic altar known as Nai Lert Shrine after the landowner or the Chao Mae Tubtim Shrine after its presiding tree spirit. Historian David Wyatt deduced that it began as a tip for the palad khik that were purged by the Siamese regime that founded Bangkok and had blamed the fall of Ayutthaya on immorality.

Yearning for protection during crisis recurs today. During the Covid-19 pandemic and protests against the regime, thousands worship effigies of Ai Khai (Egg Boy) and his shrine in Nakhon Sri Thammarat. This mischievous ghost of a monk’s servant, who’d drowned himself, is often portrayed naked as his apparition allegedly runs around nude.

Ai Khai is a version of the primeval Golden Boy spirit assistant, who gets ever more sanitised from his gruesome roots. Some shamans still conjure him by dry roasting a foetus, with 2,000 aborted foetuses recently found in a Bangkok temple. A prim take on this cult swept Thailand after the 2014 coup, in the form of baby-sized Luk Thep figures in neo-traditional garb, which resemble a possessed Blythe doll.

Similarly after the 2006 coup, the money-spinning fad for the Jatukham Ramathep amulet spawned both pricey limited editions and cheap day-glo knock-offs. The 1997 economic crash sparked a fashion for wearing a lucky nine big amulets on a chain outside one’s shirt. Now, amid a pandemic and with the seniority system being defied, what could be more comforting – or feel more threatening – than things sacred taking the perishable form of a cake?

For more on Philip Cornwel-Smith’s books, please visit the sites below: 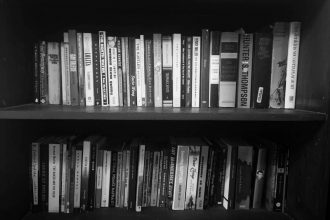 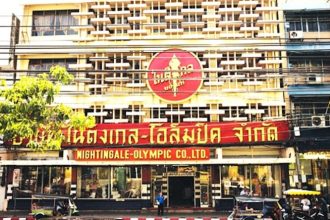 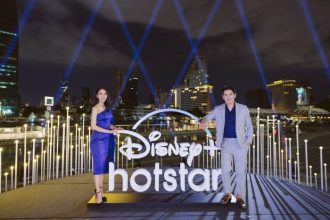