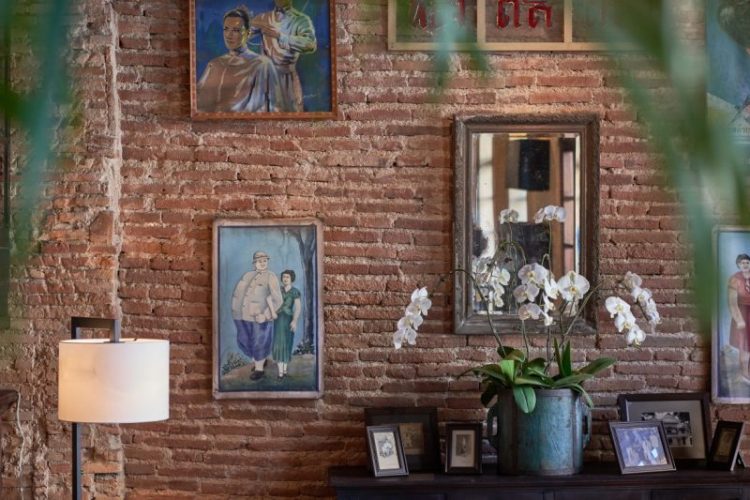 Imagine passing by an attractive heritage building and later discovering it is your own family heirloom. Would you call this destiny or pure coincidence? Rungroj Ingudananda or Tao from Bangkok fatefully learned that the “Yellow Mansion”—the Kiti Panit building he saw on Thapae Road in Chiang Mai a decade ago—actually belonged to his ancestors. But before he could renew the jewel into a stunning restaurant, its fascinating history had to be unfurled.

Back in the 1880s, during King Chulalongkorn’s reign, the logging business in Siam’s northern region, Lanna, led to a boom in construction of intricate wooden structures in major towns such as Chiang Mai, Lampang and Phrae. They blended influential architectural styles from Lanna, Burmese, Chinese and, evidently, European or other colonials with tropical sensibilities. These unique buildings served as homes, shops and offices. Constructed in 1888, Kiti Panit General Store housed in a stunning teakwood mansion on Thapae Road, one of Chiang Mai’s thoroughfares, has survived the vicissitudes of time.

The mustard-coloured mansion was originally called “Yong Tai Heng,” and it was Chiang Mai’s very first general store, founded by Mrs Soon Kitibutr, a Chinese immigrant. Patronised by wealthy aristocrats and high-ranking government officials, the store retailed imported goods such as fine china, glassware, French perfumes, cosmetics, clothing, cigarettes and liquors. During the second proprietor’s generation, Thep Kitibutr a.k.a. Tao Kae or Boss Jiew, Soon’s son, changed the store’s name to Kiti Panit and adapted the merchandise along with the trends. To uphold its popularity, it later transformed into Maison Dara, a beauty salon for ladies, renowned for facials by electric equipment. Old advertisements and posters for the parlour now adorn the restaurant’s walls. After a brief hiatus during World War II, the building was the family’s domicile. In 1957 it was reopened as Dara Clinic, offering medical treatments until its closure in 1966. Then the building’s front was rented out to “Sin Kee Nguan,” a book and magazine stall.

Fortuitously, the proprietorship of this mansion remains in the descendants’ family. Utai Kitibutr, Thep’s eldest son and Tao’s grandfather, moved to Bangkok, but Nisa Kunarak, Thep’s youngest daughter and Tao’s great-aunt, married to the clinic’s doctor and stayed on. Nisa, now 94, is the last of the Kitibutrs to live in this historic mansion. As an avid storyteller with a sharp memory, she can recall many details about this illustrious site and shared them with Tao, a member of the clan’s fifth generation.

Derelict and almost uninhabited for the past 50 years, this 130-year-old mansion features a long-deserted legacy. With blessings from Tao’s family and advice from Prof. Chulathat Kitibutr, Tao’s grandfather’s cousin and a National Artist in Vernacular Architecture, the grand makeover project started in May 2019. Renovating this weather-worn structure back to its former glory wasn’t an easy feat. Tao wanted to keep its initial appearance as much as possible while maintaining its architectural integrity and distinguished heritage. Through researching local history and photo archives, he found more than inspiration. Within the mansion’s ancient walls, boxes of photos, artefacts and ephemerae from its various avatars as general store, salon and medical clinic emerged. After four months of culling, hidden gems like rare photographs of old Lanna by Morinosuke Tanaka, a Japanese photographer, give clues and are now displayed in the restaurant.

Both Bangkok and local contractors and artisans worked on the extensive renovations, bringing the intricate woodwork—including ceilings, flooring, railings, staircase, doorways and panels—back to life. Much of the restoration work focussed on cleaning up the place, brushing off the dust and polishing up carved wooden lattices to expose the mansion’s intrinsic charm. The façade’s prominent golden shade reminisces the original yellow hue. To reinforce wooden pillars, steel beams were planted. Although its ground level suffered significant damage due to water and humidity, its upper storey was in better state. It is elegantly converted into a reception hall with seven-metre-high ceilings and twin staircases where ravishing red lanterns are raised, perfectly fit for functions and aperitifs.

After half a year, Chinoiserie wallpaper wraps the downstairs’ interior along with furniture and décor discovered in situ. Walls and cabinets are lined with family photographs, maps, antiques and memorabilia from the store’s bygone era. Tables and furnishings made from discarded, salvaged wood preserve the mementos of the structure. Upon completion, the Kiti Panit building was reincarnated as a new gastronomic destination bearing the name from its sentimental past. In this fine dining joint-venture, Tao, a co-owner of Le Du, one of Asia’s 50 Best Restaurants, teams up with Frédéric Meyer, another seasoned restaurateur from Issaya Group, including the Michelin Star-awarded Saawaan.

Devised by Chef Sujira Pongmorn or Aom from Saawaan, Kiti Panit’s menu brings the best of Lanna or Northern Thai and Tai Yai or Shan cuisines in more refined aspects. The rich Northern culinary history reflects a cultural crossroads where the people of Lanna, Myanmar, China and others—such as the hilltribes and the Pa’O or Taungthu who built these mansions—converge. Head Chef Pramkamon Suantong or Bus prepares inspired contemporary dishes with authentic flavour profiles, such as a hint of bitterness but dissimilar to rough, raw and blood-laden powerful stuffs in local markets and eateries.

Either a bowl of “Khao Soi” noodles or a family feast is feasible at Kiti Panit. Presentations include a rustic touch from bamboo-woven baskets or vessels and hand-crafted stoneware ceramics. Eating like locals, appetising Northern specialities should be heartily enjoyed with white or brown sticky rice. A perennial Lanna favourite, Nam Prik Ong (spicy tomato relish with fresh vegetables) looking like ragù alla bolognese made with minced pork, is undoubtedly a crowd-pleaser. Yum Pakchi Gai Yang comes as coriander salad with grilled chicken, perfectly cooked with crispy skin and tasty marinade. Som Tam Chang Klan lends a Northern variation of shredded green papaya salad with fermented beans, different from the ones in Isaan. Yum Het Nga Kua is a salad of lightly grilled mushrooms. Three types of mushrooms—eringi, shimeji and black cloud ear fungus—are freshly tossed in the dressing and sprinkled with toasted sesame seeds at the table.

Main courses crescendo with stronger and more robust flavours. Hung Lay Moo (Burmese pork curry) represents one of the best versions of this popular plate. Pork neck is used instead of pork belly, making it juicy and tender without being too greasy. Kua Neua Makwan (stir-fried beef with prickly ash or makwan peppercorn) is pleasantly piquant, giving slight numbing effects like Sichuan pepper or mala pepper.

However, the pièce de résistance is Khao Soi Gai or Northern-style “Khao Soi” flat egg noodles in curry broth of chicken thigh and leg. Originated from the Chin Haw or Yunnanese Muslims trader communities, this dish has become a permanent fixture in Northern Thai cuisine repertoire. Its variations of curry broth range from ones without coconut milk to richer ones with lots of it. Nowadays some blasphemous purveyors may even put pork as the main meat. For the uninitiated, Kiti Panit’s version may ruin them for life. In place of coconut milk-soaked curry, the sauce is reduced until voluptuously concentrated. This signature can be simply addictive. Light broth comes on the side to dilute its fullness if preferred.

All these ample flavours are sparklingly balanced by house-made soda infused with watermelon, lime or tangerine, or enhanced by cold beer, cocktails or wines that can withstand the Northern gusto. The feast is refreshingly finished with both Tangmo Parfait with layers of watermelon sundae in a tall glass and Cheesecake Saowarod or passionfruit cheesecake, conceived by Arisara Chongphanitkul or Paper, the pastry chef from Ici.

Like Lanna’s cultural crossroads, Kiti Panit General Store has arrived at another milestone. At this new intersection of history, architecture, cuisine and family treasure, it retains a sense of heritage and connection, while offering a unique dining experience for both locals and visitors. 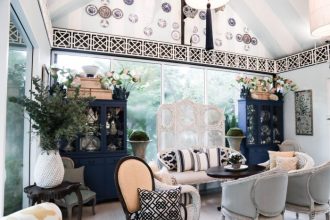 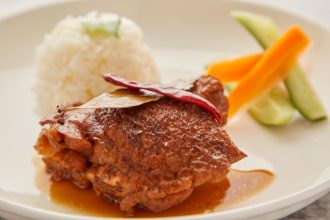